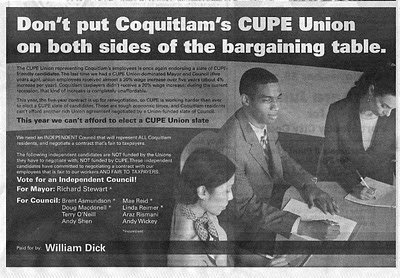 Hot on the heels of Jon Ferry's column in today's Province, which is about, in part, the financial and organizational support that CUPE gave to Neal Nicholson in last year's by-election, comes this blockbuster, pictured.
The graphic is of an ad that appeared on page 31 of today's Tri-City News (ironically, right below one of CUPE-endorsed Selina Robinson's ads).
For the record, I had nothing to do with the conception, purchase or placement of the ad. I had heard rumours that Coquitlam businessman William Dick, who is identified as the purchaser of the ad, was contemplating such an action, as he has attended several all-candidates meetings and has been vocal about his opposition to the undue influence of CUPE.
I was pleased to see that Mr. Dick, who two months ago donated to my campaign, had explained the controversy so well and, further, that he had gone so far as to endorse a group of independent candidates, including me, for council.
As readers of this blog and my Facebook page know, I have been writing about this subject for several weeks now in the hopes that the public would take notice. With today's publication of Mr. Ferry's column (which I blogged about earlier) and Mr. Dick's ad, it seems my efforts are finally bearing some fruit.
Posted by Terry O'Neill at 8:19 PM