The Number One Issue 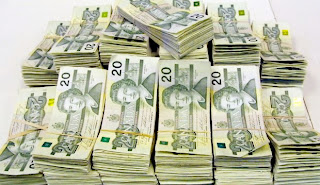 With the Vancouver Sun and the Province both publishing front-page, above-the-fold stories this morning about the CFIB's latest findings on municipal overspending, our campaign's primary theme could not be more timely and necessary. And our decision to take the CFIB's Taxpayer Pledge looks better by the moment.

I delivered this message again at last night's all-candidates meeting in Maillardville, and it'll be the number-one topic as I continue knocking on doors throughout the week.

Here are some of my thoughts on "The Most Important Issue" of the campaign:

Let’s get right down to business and talk about the most important issue facing Coquitlam: The unsustainably high rate of city spending, and the high property taxes that it causes.

Talk to the average homeowner or business person, and you quickly learn that this is Issue Number One. And it grows even more important by the day, as the global economy continues to struggle.

You might have heard that Finance Minister Jim Flaherty released his fall economic update last week. He made it very clear: Our country’s economy is still weak. He warned that the European sovereign-debt-and-banking crisis poses a significant risk to the global economy and will lead to slower growth here. His government will have to adjust.

What about here in Coquitlam? Over the past several years, the city has boosted property tax rates to fund operational spending that is higher than we can afford. Public-sector wages soared, even as private-sector ones stagnated.

Given this record, can we trust council to do the right thing, and reduce the rate of operational spending and tax increases, in response to the ongoing economic slowdown?

Can we at least trust council, including those backed by CUPE—the union that represents city workers—to make fair and balanced decisions at the bargaining table to control our rapidly growing expenses?

I am committed to responsible budgeting. That’s why I signed the CFIB’s Taxpayer Pledge, to support a municipal Auditor General, to cap spending increases, and to improve the business climate in Coquitlam.

There’s a big job ahead, and I’m ready to take it on. We’ll engage the public to help set priorities and make important decisions about protecting valuable services. And we’ll put a halt to overspending.
Photo from VancouverSun.com.
Posted by Terry O'Neill at 8:53 AM