About those schools on Burke Mountain

NOTE: The information, below, is out of date. I've now written an updating piece on the current status of schools on Burke Mountain please CLICK HERE to read it -- Nov. 9, 2016.

Last Monday's public hearing, on the proposal to rezone land on Burke Mountain to facilitate the development of the first full neighbhourhood in the Partington Creek area, as well as to zone land for a school there, elicited much interest from the public, specifically on the issue of why no new schools had been built on Burke Mountain, even though the city had designated so many sites for schools.

Both the News and the Now devoted quite a lot of coverage to the subject, as you will see if you click on the links. But there's still some information I'd like to get on the record to allow the public to better understand the situation.

Many members of council, including myself, spent a fair bit of time during that public hearing explaining that it is not the city's job to build the schools; that responsibility rests with the Ministry of Education and School District 43. Nevertheless, we acknowledged that the City does have a role: we designate land in our Official Community Plan and our Neighbhourhood plans as (possible or potential) school sites, and we rezone land to allow school construction once the SD is prepared to move ahead. 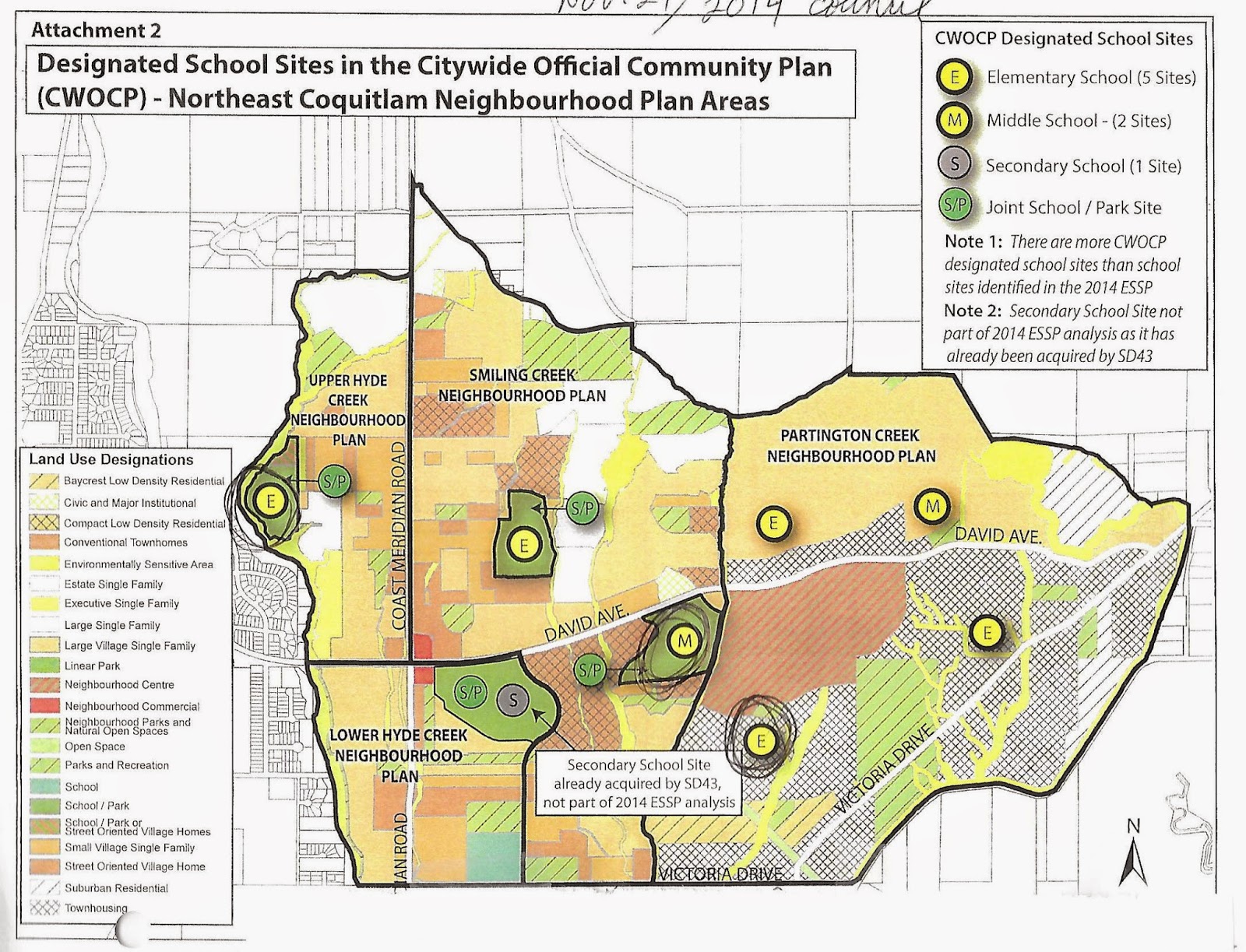 But we recognized that the OCP and the NPs can create  uncertainty, in that some people interpret them as meaning schools WILL be built in the designated areas, when, in fact, the identified sites are only potential sites.

Also, it appears the SD communication on the issue, as to the number and timing of schools on Burke Mountain, has not been noticed by many members of the public.

So, for the record, here's what's happening:

1. Our OCP shows eight potential school sites on Burke Mountain, as per the map above. However, the school board announced in December 2012 that it would be needing only five -- not eight -- schools on Burke Mountain. I have circled the three sites that are "not preferred" by the School District.

2. Of the five preferred sites, the E site in the Smiling Creek area is now in the process of being acquired. In fact, the City and the SD announced last fall that the land acquisition was proceeding for a joint school-park site.This is the Smiling Creek Elementary School. Here a link to a story about that site. 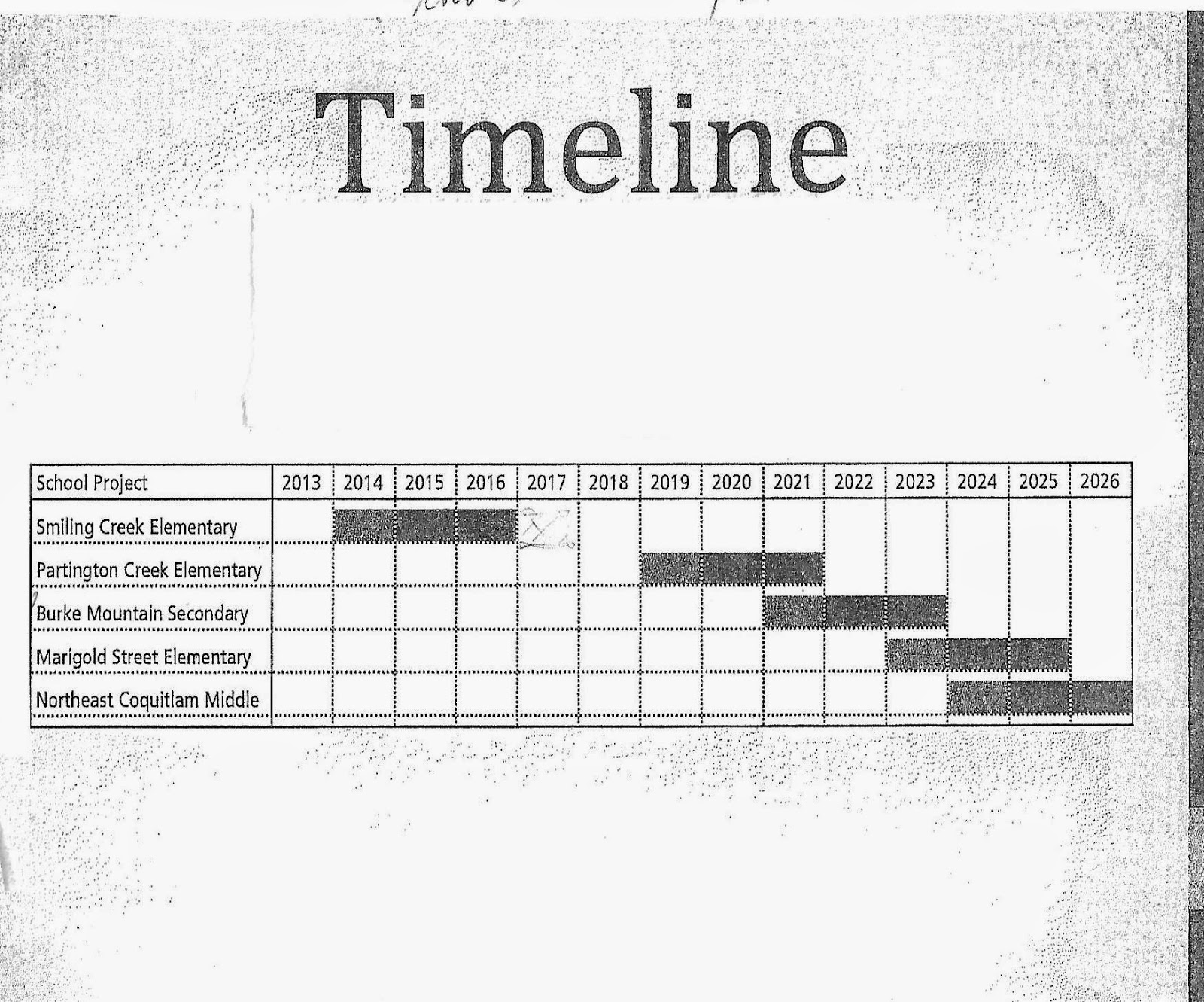 3. The S site in the Lower Hyde Creek is where a new high school will, in fact, be built. That's firm.

4. The E site in the upper Partington Creek area is the site that was the subject of Monday's public hearing and eventual rezoning vote (unanimously in favour).

5. The School District has also released a projected time line for the construction of the five schools.  See the nearby chart. The black bars indicate planning-to-construction-to-opening. Please note that the Smiling Creek project is already a year behind this schedule and likely won't be completed now until sometime in 2017 according to the board.

Stay tuned for more information from the School District in the coming weeks and months. Burke Mountain residents are rightly frustrated by the slow pace of school construction, and it's high time that the process for approval and construction was speeded up. It simply isn't right that, as we heard on Monday, every child on one street is attending a different school -- a half dozen or more schools in total. That's no way to build a neighbourhood!