Try this tactic on the occupiers 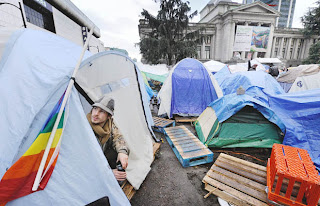 I can understand why Vancouver politicians don't want to send in the police to clear out the Occupy Vancouver campers. Too much potential for mayhem, too close to an election.
And, I like, in principle, the soft pressure being exerted by the fire chief. But I think it's probably not enough, because someone will have to enforce the safety measures, and that will bring us back to the possibility of a direct confrontation between the occupiers and the police--something that could turn very nasty.
My solution? Put a high temporary fence around the entire camp, with only a couple of exits. Station police officers at the exits. And don't allow anyone or anything in. The occupiers will be free to go, but no one and nothing comes in. This should have the effect of forcing the misguided dissidents off the public square in a matter of days.
Photo from the Province.
Posted by Terry O'Neill at 8:56 AM