It is, of course, a terrible shame that Squamish resident Mike Racicot died last summer after jumping off a mountain in Switzerland. Terrible that either his wingsuit or parachute failed him. Terrible that the calamity occurred when Racicot, at age 37, was still in the prime of his life. Terrible that he left so many saddened friends and relatives.
As we learn from a feature story, which comprised three-quarters of a page in a recent edition of the Vancouver Sun, Racicot was something of a thrill-seeking non-conformist who, while growing up, helped form a “graffiti collective” that “left their marks” on (i.e., vandalized) buildings throughout Ottawa.
Later, after riding a scooter across Canada, he settled (or, more precisely, squatted) in Whistler. Finding rents too high, he built a rudimentary treehouse with materials he stole from construction sites. He then lived at this secret, off-the-grid hideout, reportedly surviving on food he could obtain from local hotels, again by theft.
Despite his illicit eccentricities, he became something of a “legend” within the thrill-seeking “community” because of the enthusiasm with which he embraced the sport of jumping off natural and man-made structures.
The lengthy Sun story also makes much of the unconventional way in which the ashes of Racicot’s cremated body were dispersed. It seems that his fellow thrill-seekers scattered them from atop peaks and cliffs throughout the world. It’s what Mike
wanted, they said. 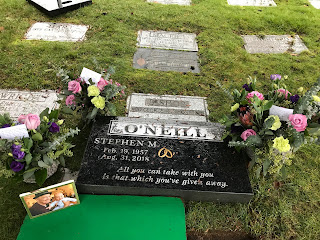 At which point I must now pause and disclose that I am writing this during the late afternoon of January 3, a day which began with my reading of the story described above and then continued with my driving, along with my wife, to a cemetery where we met other family members and a priest.
We assembled under a dark-blue tarp, which did little to protect us from the day’s unmerciful wind and icy rain. And then we prayerfully interred the remains of my brother Steve, who also died last summer and who also left behind many grieving friends and family, including his wife, four children and one grandchild (with one more soon to be born).
Steve, who succumbed to cancer at age 61, left a legacy of excellence and integrity. A gifted construction engineer and project manager, Steve was widely respected and admired in his industry. He was equally accomplished and renowned as a volunteer, one who donated his time and talent to everything from the administrations of track-and-field meets to the construction of a parish school in North Vancouver.
He was what we used to call “a solid sort of a guy,” “a good family man,” and “a good provider.” Steve was justifiably proud of what he accomplished, and his family is justifiably proud of him.
But, as we stood around Steve’s grave, saying our final farewells, I could not help but reflect on the nature of this particular age in which we live – an age that celebrates the renegade, even the felonious one, while paying scant attention to those, like Steve, who lived a life of quiet, conventional excellence.
Is a good and outstanding person just too mundane for the news media to care about? Is a charming and unconventional miscreant just too thrilling to ignore?
What I do know is that a 1,200-word story about the death of an adrenaline junkie is, essentially, a celebration and glamorization of a lifestyle and, as such, it is also an encouragement of it. And I think we should aim higher.

Posted by Terry O'Neill at 5:26 PM No comments: