Whose interests are being served? 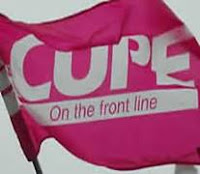 In this morning's Province, Laura Jones, sr v-p with the CFIB, writes compellingly about overspending by municipal governments in the province. "Operating spending [from 2000-2008] soared by 58 percent, or double what a reasonable benchmark suggests tht it should be.
"Much of this is due to inflated wages and benefits at the municipal level, where compensation is about 35 per cent higher than equivalent private-sector jobs."
On a related subject, Peter A. Epp of Coquitlam writes, in a letter [not yet on line, but a similar one, from last week, is] to the Tri-City News, that, "With no one minding the store, city staff has grown into a bloated, overpaid and self-absorbed bureaucracy...I hope the mandate of the promised provincial municipal auditor general includes a review of all city staff positions."
Both of these items touch on what is undoubtedly the big issue of this campaign: the direct relationship between the property-tax increases we've seen over the past several years, and the high rate of pay increases and overall pay given, primarily, to the city's 1,444 CUPE workers, and also to the exempt staff.
The big question: can we trust new candidates and incumbents who have a direct relationship with CUPE, through major donations and even, as I've written about earlier, through CUPE being an officially registered Campaign Organizer, to put the interests of the taxpayer first?
As I noted in Facebook last night, it was very interesting to hear Neal Nicholson reveal a figure of two percent, when talking about what raise CUPE might earn in the coming year, during the all-candidates discussion we had about the city's finances. Two percent, with maybe some changes to the benefits package, he suggested, as if pulling the figure out of the air. But given his close ties to CUPE, I'm wondering whether this wasn't actually an opening gambit by the union, as a prelude to next year's bargaining.
For the record, I'm in agreement with Mayor Richard Stewart and Councillor Linda Reimer in saying there should be a ZERO percent raise. The current four percent raise is an insult to taxpayers and private-sector workers.
Posted by Terry O'Neill at 10:44 AM