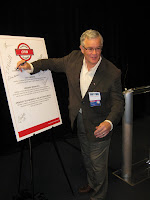 The Coquitlam Now's story, on the election of two new members to Coquitlam Council (Craig Hodge and me), conveniently runs on the same page (A7, Nov. 23 issue) as my "Thank You Coquitlam!" ad.
This ad reads, in part, "I promise to work hard on your behalf." But exactly what will be my priority? The answer is found, also in part, in the above-mentioned newspaper story. But the story, by the fine reporter John Kurucz, doesn't quite get it right.
Mr. Kurucz correctly quotes me as saying that I (and, moreover, a great many of the voters I talked with over the last two or three months) believe that "property tax increases"(this emphasis, added by me, is key) have been "way too high."
However, Mr. Kurucz paraphrases this position by saying that my platform "consisted of promises to rein in municipal spending and reduce property taxes."
This is only partially correct. I did say I would work to rein in municipal spending by limiting the increases in operating expenditures. But, I never said I would work to actually reduce property taxes. What I said is that I would work dilegently to reduce the rate of growth of those property taxes, and that I would be extremely happy if there was no growth.
But to actually reduce property taxes? While this would be wonderful, I don't think it's a realistic goal, and I never held that out as an option.
Furthermore, at the beginning of the campaign, I signed the CFIB's Taxpayer Pledge, in which I promised to rein in spending increases to no more than what you'd expect with inflation and population growth.
Given this, and given that there's a direct link between spending increases and property-tax increases, it can be concluded that I am not necessarily opposed to property-tax increases driven by the need for the city to raise revenues to keep up with inflation.
On the other hand, increased spending driven by increased population should not necessarily lead to higher property taxes; this is because the broader tax base created by that increased population will, by itself, generate more revenue without an increase in property tax rates.
Photo shows me signing the CFIB pledge.
Posted by Terry O'Neill at 10:16 AM