Taking the plunge. Signing the Pledge 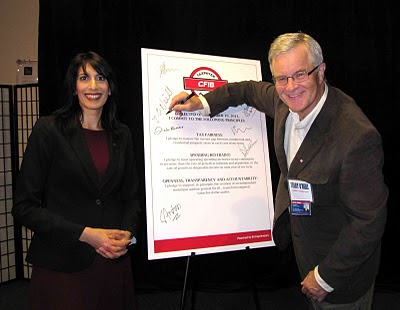 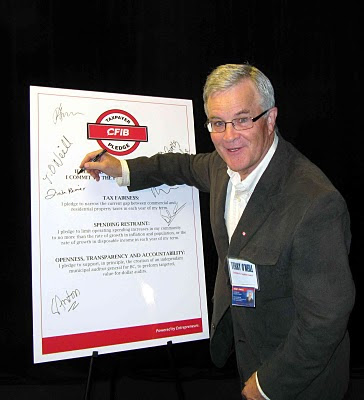 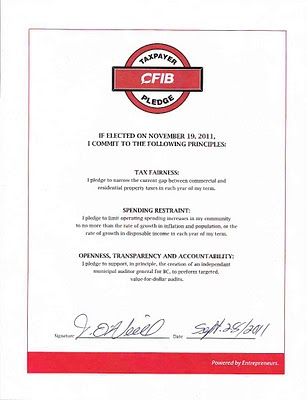 We'll I've done it. This morning I joined several other politicians and candidates (including Andy Shen and Linda Reimer of Coquitlam) in signing the Canadian Federation of Independent Business's new Taxpayer Pledge.
Several TV news crews were on hand, as well as a reporter for the Province, so I expect a fair bit of coverage tonight and tomorrow.
The photos show Shachi Kurl of the CFIB and me at the event, a solo shot of me, and a close-up of the pledge form.
Here's the text of the press release I just distributed:

O’Neill joined the likes of Vancouver mayoral candidate Susan Anton and incumbent Councillors Linda Reimer of Coquitlam and Diana Dilworth of Port Moody in signing a pledge committing themselves to the principles of property-tax fairness, spending restraint, and openness, transparency and accountability.

“The CFIB is to be commended for launching a campaign which has taxpayers’ best interests at its heart,” O’Neill commented. “I’m proud to be in the first wave of what I predict will be an important and impactful campaign.”

O’Neill says his commitment to the principles contained in the pledge reflect concerns expressed to him in recent months by residents and business leaders alike.

The City of Coquitlam’s recently released citizen-satisfaction survey found that, for the first time in the survey's history, more residents were in favour of cutting services (46%) than increasing taxes (45%). As recently as 2007, 58% of respondents were saying they favoured increasing taxes, compared with only 31% who supported cutting services.