Happy for now, but taxes are too high 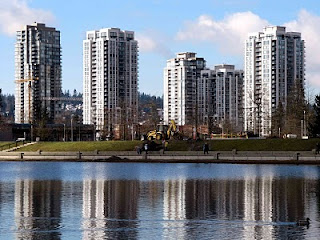 Coquitlam City Council has just made public the results of its latest citizen-satisfaction survey and, on the surface, it appears city residents are a pretty satisfied lot. Scratch a bit deeper, however, and there are several areas where it's apparent that there's growing discontent, especially about high property taxes.
First, though, a little anecdote from tonight's council meeting. After Jennifer Renny, senior research manager of Ipsos Reid (which conducted the survey), finished presenting the report to the meeting, Councillor Lou Sekora complained that the report had just been dropped on his desk, and that he hadn't had enough time to digest its contents.
A city staffer calmly responded that, in fact, the report had been mailed to all members of council in July. Seemingly unfazed by this answer--an answer that suggested that Sekora had failed to read a report that was sent to him two months prior--Sekora grumbled something about his having wanted today's report delivered earlier to him so he could have compared its findings to those of the July report. Clearly, however, there was only one report--a fact confirmed to me later by staff. Classic Lou.
Back to the report. The big finding is that "Virtually all (99%) citizens rate the quality of life in the City of Coquitlam positively." That's two points higher than the regional norm, and it's a figure that's three points higher than last year. In fact, over the past nine years, the lowest score was 95% (in 2008).
Significantly, of this year's 99%, 47% of respondents rated the quality of life as "Very Good"--a six-point gain over last year, which had, in turn, been the highest to date.

A Good Quality of Life
Bottom line: more Coquitlam residents rate the quality of life as "Good" than ever before, and more of them are also rating it as "Very Good" than ever before.
It certainly makes sense to me that so many people have the good sense to realize what a fine community we live in, compared not only to less-prosperous and more-poorly managed areas of the province and country, but also to most other parts of the world. We have a wonderful balance of public facilities, recreational amenities, infrastructure, and access to the outdoors.
However, it's not Utopia. "On an unprompted basis, citizens point to transportation as the most important local issue facing the City of Coquitlam (40%)," the report states. Traffic congestion, the Never-Green Line, and lack of rapid and public transit were mentioned.
As well, high taxes and government spending, especially as it relates to property taxes, figured highly as areas of concern.
In fact, it's clear to me that Coquitlam residents are starting to grow quite concerned about the high level of our property taxes. This is evident from a question regarding citizens' choices on the issue of balancing taxation and delivery of services.

Cut Services, Don't Raise Taxes
The report disclosed that, for the first time in the survey's history, more people were in favour of cutting services (46%) than increasing taxes (45%). As recently as 2007, 58% of respondents were saying they favoured increasing taxes, compared with only 31% who supported cutting services.
I believe that the fact the balance has now tipped reflects the fact that property taxes have risen at far too high of a rate, especially for many local businesses.
It's a message that Councillors and candidates will ignore at their peril.
Posted by Terry O'Neill at 9:11 PM