Yup, I'll be running in the November election 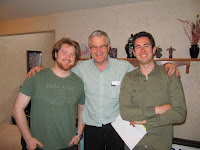 Loyal readers of the Tri-City News will notice that I'm not in my usual Friday spot in today's edition. Instead, there's a new Face to Face columnist, Andy Radia, and a note from the editor explaining that I've stepped aside to concentrate on running for Coquitlam Council in the November election. And so, today marks the "official" launch of the campaign.
Besides the announcement in the News, I've also issued a press release, which I've pasted below. Updates to our website are coming soon, as well. Please check back here often for more news and for my thoughts on the campaign as it develops.
And, oh yes, the photo above shows my two sons and me, on election night in May 2010, when, with the help of scores of volunteers such as them, we were proud to finish in a very strong second place--our share of the vote, 31%, totalling more than the third- to eighth-place finishers combined.


O’Neill sets sights on Coquitlam Council seat
COQUITLAM –Journalist and community activist Terry O’Neill has announced his decision to run in the November 19 general election for a seat on Coquitlam City Council.

O’Neill first ran for council in the May 2010 by-election, collecting 31 percent of the vote to finish a solid second among eight candidates.

“Coquitlam residents told me they want a strong voice and firm hand at City Hall to keep property taxes down, push for construction of the Evergreen Line and ensure that council’s focus stays squarely on local affairs,” O’Neill says. “They’ve spoken loud and clear, and now it’s time for the work to be done.”

O’Neill brings a record of more than three decades’ worth of community volunteering to his candidacy. He was a founding member and past president of The Eagle Ridge Residents Association; currently sits on the board of the Coquitlam Foundation, a leading charitable organization; is a member of the organizing committee (and Master of Ceremonies) for the Alzheimer Society of B.C.’s annual Walk for Memories in the Tri-Cities; and chairs the finance committee of St. Joseph’s Parish.

O’Neill is a past MC of the Crossroads Hospice Society’s Treasures of Christmas gala and also sits on the board of Signal Hill, a provincial educational society. As well, he has been honoured by the Red Cross Society of Canada for humanitarianism and by Canada Blood Services for distinguished citizenship—both in recognition his lifelong commitment to their blood-donor programs.

O’Neill’s career has seen him win national news awards while editing and writing for such publications as B.C. Report and the Western Standard. More recently, he was worked with the National Post and Coquitlam’s Tri-City News, for which he wrote half of the weekly Face to Face column for more than five years. He was the inaugural winner of the Christian Coalition of B.C.’s award for Journalistic Integrity.

“With my record of community involvement and professional accomplishment, I believe I can be trusted to listen to the voters, make the tough decisions, and be held accountable for my actions,” O’Neill says. “The bottom line is that we can work together to find realistic, commonsense solutions to our problems.”

A graduate of Simon Fraser and Carleton universities, O’Neill and his wife, Mary O’Neill, principal of Dr. Charles Best Secondary, are the parents of two grown sons.