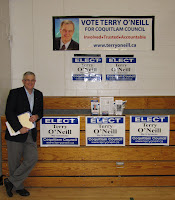 The third and final of the all-candidates' meetings is now over. I'd say it was another great success for the campaign, and probably my best performance of the three. The photo shows the little display I set up in the gym of Banting Middle before the meeting began.

Here's the text of my Opening Speech.

I’d like to begin by thanking the Burquitlam Community Association for hosting this meeting. Thanks, also, to everyone in the audience for attending. It’s great for democracy.

You know, I’ve been talking to hundreds of voters over the past month, and many ask, “Why are you running?”

My answer is simple: After a long career in journalism writing editorials and opinion pieces like the Face to Face debate in the Tri-City News, the time has come to stop talking and start doing.

I’ve always dug for the truth and taken strong stands. Indeed, my job was to spark debate. Now, I'm ready to put down my reporter’s pencil and serve my community in a different fashion, as a city councillor.

My priorities are not unlike those of the majority of voters:

*We want sound management of our city’s budget, keeping tax increases to a minimum while protecting key services. I’m happy to report that there’s wide agreement among my fellow candidates on this point.

Mr. Nicholson, for example, agreed with me last night that council should reduce the number of workers on the city payroll, using attrition and retirement.

*There’s also broad agreement on an issue that’s of great interest to Burquitlam: completion of the Evergreen Line. Here, however, Mr. Nicholson and I disagree. I want all B.C. taxpayers to pay equally for the shortfall. Mr. Nicholson, however, favours raising funds by slapping a special charge on motorists using the Barnet Highway.

[Note: later in the meeting, Mr. Nicholson attempted to explain that his toll or user-fee idea was actually more of a general, long-term thought, and not directly related to paying for the Evergreen.]

I’ve been involved in community affairs since I helped found The Eagle Ridge Residents Association 30 years ago.

I can be trusted to make the best decisions for all Coquitlam.

And I promise to be accountable for my actions in office.