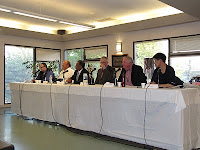 With less than a week to go now before the by-election, it's clear that the contest is shaping up as a battle between the single Big Labour/NDP candidate and everyone else on the centre-right. The only problem is that the majority of Coquitlam voters don't realize it.

The Left's champion is Neal Nicholson, who is backed by the NDP machine, endorsed by NDP politicians and the firefighter's union, and supported financially by CUPE.

With all this union support, one wonders about Nicholson's statement at last Wednesday's Maillardville all-candidates meeting (pictured), in which he agreed with my idea that, as a budget-control measure, we should reduce the size of the city staff through attrition and retirements. In other words, we should institute a hiring freeze until we get spending under control.

Does CUPE know about this? Has the New Westminster Labour Council heard? If so, do they agree? Not likely.

I have no reason to doubt Nicholson's sincerity, but I can't see how Big Labour can support a man who backs a reduction in the city's work force. That just ain't Big Labour's style. I await an explanation.

Meantime, I believe that I have emerged as the leading non-Big Labour candidate. My policies are aimed at providing the most good for the broadest range of Coquitlam residents, not just for special interests. I believe that using common sense, we can find common ground on most of the big problems facing us.

By the way, those doubting my memory of Nicholson's statement need only listen to the audio recording of the proceedings, which is now conveniently on-line here.
Posted by Terry O'Neill at 10:46 PM