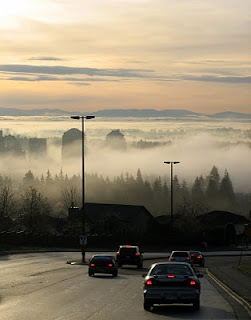 As I informed readers last week, I recently submitted an op-ed column to the on-line edition of the Georgia Straight newspaper, after the editor put out a request to all eight candidates.

I quickly agreed to write the piece, but didn't think it would be widely read by Coquitlam voters. I did conclude, however, that the column would allow me to elaborate on an important part of my campaign platform: defending suburban homeowners. (The picture shows central Coquitlam on a foggy fall morning a few years ago.)

The Straight published the piece last week, and I figured that was the end of it (although I did check the paper's website from time to time to see if anyone else had written a column; as of today, only one other candidate had done so).

Imagine my pleasant surprise, then, when a friend called me a few hours ago (while I was in the middle of door-knocking in Ranch Park) to deliver the great news that my column had caught the interest of Jon Ferry, the Vancouver Province newspaper's front-section columnist and, furthermore, that Ferry had written in today's paper that he was in complete agreement with my position.

All in all, it's great news for the campaign, especially as we head into the three consecutive all-candidates meetings this week. Here's the Province column, below:

Out in Langley over the weekend, I was struck by just how pleasant life in the Lower Mainland suburbs can be with a large lot, a sizzling barbecue and a backyard full of kids.

And I thought how it wrong it was for politically correct politicians and transportation "experts" continually to rail against suburban sprawl as it were some form of disease.

Not everyone loves downtown living, at least if they have a family to raise or an animal or two to feed.

Nor do they thrill to the mantra of forced housing densification, or eco-density, that's become so fashionable among academics and urban planners.

For many Lower Mainland residents, the dream is not to live in a luxury condo in Vancouver's West End or Olympic Village. They'd much prefer a single-family home in the Fraser Valley with a decent-sized backyard, approachable neighbours and some trees their children can climb.

But too often their voices go unreported in civic reports, university studies . . . and B movies that invariably give the suburbs a bad rap.

That's why I was happy to see that Terry O'Neill, a candidate in the May 15 Coquitlam city byelection, has been vigorously defending the suburban lifestyle he and his wife have enjoyed for the past 30 years. "This is our home. This is where we live," the longtime journalist wrote in a Georgia Straight op-ed. "And this place . . . despite what some downtown urbanites might think, is not some sort of suburban blight. It is the manifestation of our hope and dreams."

It was much the same point that retired Maple Ridge teacher Dan Banov made recently in taking issue with patronizing remarks by local city Coun. Craig Speirs about the alleged inactivity of those who lived on large suburban properties. "The kids are less healthy, more obese," Speirs was quoted as saying.

Banov, who lives on acreage in Whonnock, quite rightly questioned where Speirs had got his information. "I always thought children living closer to nature would give them a healthier life, climbing trees instead of monkey bars," he fired back in a letter to the Maple Ridge News.

Certainly, life in the suburbs isn't all peaches and cream. And suburban motorists increasingly are being taxed to death. But despite the media hype about people moving into the urban core of Vancouver and other large cities, there's little or no evidence suburban living is becoming any less popular in North America.

High-profile U.S. geographer Joel Kotkin says the reason is that the suburbs represent for most people the best, most practical and most community-minded choice for raising their families.

"Indeed, for four decades, according to numerous surveys, the portion of the population that prefers to live in a big city has consistently been in the 10-to 20-per-cent range, while roughly 50 per cent or more opt for suburbs or exurbs," Kotkin noted.

The bottom line? Lower Mainland community leaders need to stop fixating on the supposed virtues of densification and downtown living . . . and start sticking up for the burbs. After all, they're where most of us live.
Posted by Terry O'Neill at 1:47 PM