What to do with Coquitlam's land holdings? 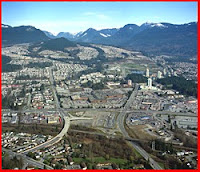 One of the more fascinating bits of information made public today during our first day of listening to budget presentations is that the City of Coquitlam owns about a quarter-of-a-billion dollars worth of real estate within city boundaries, the majority on Burke Mountain in areas that are to be developed.
Citizens might see this figure and immediately think the City should sell off the land in today's hot market, and then use the proceeds (including the interest) to keep taxes low for years to come. Extra revenue would also be gained from the collection of property taxes on the land, which would be owned by private interests and, therefore, taxable.
As explained in public today, the city's policy is basically to bank this land, to buy and sell judiciously as the need arises, and also to set aside reserves to replace capital assets in the future. Furthermore, it was explained that controlling a large parcel of land on Burke Mountain gives the City more say over how it should be developed.
Readers with long memories will recall that the Province of British Columbia had an opposite approach to land sales when it came to the Expo Lands, which, controversially, were sold as one large, undeveloped parcel to Li Ka-shing after Expo '86. Most observers said the Province got nowhere near as much money for the land as it should have received--and would have, if it had held onto the land, serviced it, and sold it parcel by parcel.
At the other end of the spectrum, the City of Surrey is now actively working as a developer in its own right--and this is controversial, as well.
I'll be studying the matter further in the coming weeks. But, in the final analysis, it may come down to a matter of one's opinions about the proper role of government and about one's philosophy regarding budget processes.
One way or the other, though, it's a good problem to have.
Photo from bestofcoquitlambc.com
Posted by Terry O'Neill at 4:26 PM