A special award for a special woman 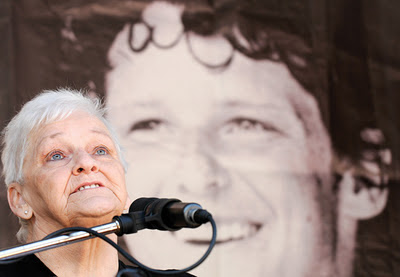 Last night's 11th annual Business Excellence Awards, staged by the Tri-Cities Chamber of Commerce, was (as expected) highlighted by an award. But it wasn't to a business or a business leader. Rather, it was to an inspiring woman.

First, though, there definitely was some excitement and pleasure surrounding the awarding of several prizes to local businesses and business leaders for their outstanding accomplishments--not only for their financial successes but also for their community involvement. You'll likely read about them in upcoming editions of the Now and the News, but here's the scoop now:

Other award winners, announced previously, were Fred Soofi, Member of the Year; and the late Betty Fox, Legacy Award. Betty's daughter and granddaughter accepted the award on behalf of the Fox family, and were deeply touched.

Regarding the award, the Chamber's program notes said it beautifully: "Betty Fox was the mother of an icon who became an icon herself. She was our national mother, our national hero, an inspiration we have always watched with awe...In carrying on her son's legacy, Betty Fox created a legacy of her own."

Betty Fox died on June 17 of last year, and she, like her son Terry, is greatly missed.

Photo from salt-spring-island.org
Posted by Terry O'Neill at 9:36 PM