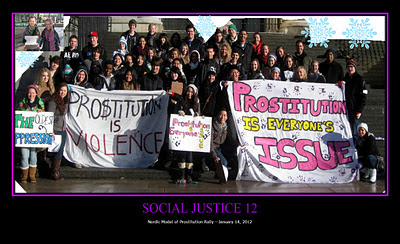 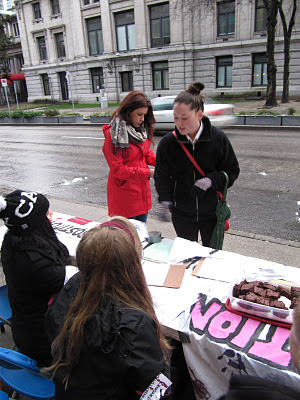 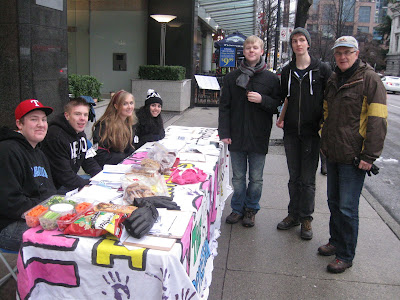 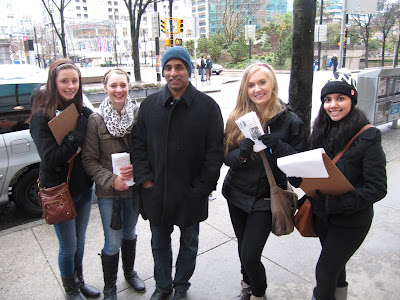 As noted in yesterday's entry, I attended an event in downtown Vancouver yesterday morning, at which 60 Social Justice 12 students from Dr. Charles Best Secondary, led by teacher Ken Ipe, were collecting signatures for a petition asking the federal government to toughen the laws against prostitution and pimping.
Significantly, the "Nordic model" they support treats prostitutes as victims of oppression. It does not seek to normalize prostitution and, in fact, embraces a philosophy that is the opposite of what the mainstream media are calling for these days -- legalization of prostitution in order to make the practice safer for women.
From my perspective, the Nordic model is by far the better approach. It does have one flaw, however, and that's that, by defining the prostitute only as a victim, it relieves the prostitute herself of any responsibility for her actions. I am a fierce believer in individual responsibility; we are all individual actors in the moral universe and have the power to make up our own minds.
Nevertheless, I understand that the abuse and addiction that often precede a woman's entry into prostitution can seriously undermine her ability to make responsible decisions--and that is why I signed the petition.
Above are photographs from yesterday's event. I took all but the group photo and the photo showing me with some of the students; these were taken by Mr. Ipe.
Posted by Terry O'Neill at 8:57 AM