The 'freeman' phones it in 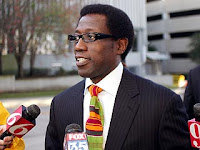 Going "off the [electrical] grid" is one thing. But taking a headlong, flying leap off the entire governmental-legal-societal grid is another thing entirely. So what am I referring to? It's a loose organization called the "freeman of the land" movement. And one of its adherents made his presence known this morning in Coquitlam Council Chambers, where the regular bylaw adjudication hearings are held.
First, a bit about this "freeman" thing. Here's a good article from the U.S. point view. And here's a link to one of their sites. I first stumbled upon this movement 10 or 15 years ago, when I was invited to speak at one of their events. I had no idea what I was getting into--arguments about how a freeman isn't a legal person, about how the only real law is contract law, about how a government is a corporation and, if a person hasn't signed a legal contract with that governmental corporation, he wasn't bound by its rules or regulations.
All fascinating stuff in a nerdy, law-student, over-a-couple-of-beers kind of way. But it simply doesn't hold water. And every time someone tries to employ the philosophy's circuitous logic to get out of paying fines or taxes, the courts smack him down but good. Just ask actor Wesley Snipes (pictured above), who fell for the "freeman" baloney and ended up in the slammer for three years. This story gives details of his case without getting into Snipes's freeman ideology. This story, though, gives more of that background.
The scheduled appearance of "Peter of the Family Moore" at 10:30 a.m. this morning caused a bit of a buzz around the bylaw-enforcement and legal-services offices of City Hall because he had already spoken to a screening officer and explained his bizarre defence against a $75 parking ticket. Essentially, it boiled down to his declarations that he did not believe our governments have the power to make laws and, further, that a person is ruled only by common or contract law.
Coincidentally, Councillor Craig Hodge and I had decided to attend the hearings this morning in order to better acquaint ourselves with the workings of the city government. We witnessed an interesting morning of appeals, primarily against parking tickets, but one also involving a grow-op that the defendants said was legally licenced, but which the evidence showed was not.
The icing on the cake of a most interesting morning was the Moore adjudication. He didn't attend in person, as is his right, so the hearing was conducted by conference call and speaker phone under the auspices of provincial adjudicator, Mr. Wise (Wyse?).
"Peter of the Family Moore" proved to be a full-blown "freeman," contesting every aspect of the case. He didn't agree that the piece of paper that had been affixed to the car in question should be called a ticket. He was evasive about the car's ownership. He didn't agree that the government had the power to issue tickets. He didn't agree that the government had the power to compel him to pay the ticket. He didn't even believe in the government. And on and on.
The adjudicator kept his composure throughout the hearing, but in the end signalled he had had enough and rejected the appeal. Not surprisingly, the man known as "Peter of the Family Moore" gave every indication he would ignore the finding.

Photo of actor Wesley Snipes from people.com.
Posted by Terry O'Neill at 12:39 PM