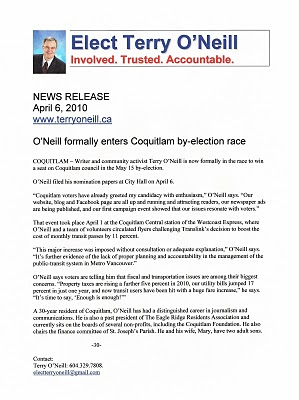 It's official. I'm now a candidate for Coquitlam City Council in the May 15 by-election. Here's the press release, above, that I'm now in the process of distributing. Just click on it to get a magnified, easier-to-read view.

Meantime, I had a successful evening door-knocking in my neighbourhood yesterday, making contact with dozens of nearby residents, many of whom became enthusiastic supporters on the spot (!) and agreed to place signs on their lawns later in the campaign.

The number-one issue on the minds of most people in this neighbourhood was secondary suites. No two shared the same concerns, however. Some thought enforcement was too lax. Some thought it was too stringent. Some were concerned with suites' impact on street parking. Some with suite owners not paying their fair share of utilities fees. Good discussions all 'round, and definitely a subject that is worth looking into.
Posted by Terry O'Neill at 9:29 AM