The message and the masses 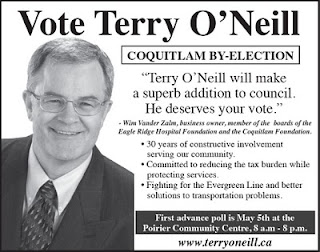 With the first advance poll for the Coquitlam Council by-election less than a week away now, one might assume that the majority of residents would know about the vote and also have some sort of an understanding about who the candidates are. From what I've learned from several weeks of intensive door-knocking, however, the truth is that about half of Coquitlam residents are not even aware of the by-election. My recurring newspaper ads, such as the one pictured here (which will run tomorrow), have helped raise awareness, but it's clear that more is needed.

Are there ways to better inform voters of important municipal events such as this by-election, thereby engaging more interest and boosting turnout? It's an important question, especially considering the fact that the last time the city held a council by-election only 5.1 percent of registered voters cast ballots.

One of the problems is the city's own tight restrictions on pre-election advertising. For example, candidates are not allowed to erect lawn signs until 10 days before the election day. Moreover, the size of the signs are strictly regulated; none may be greater than two-feet square.

One idea I proposed recently to city officials would be to allow candidates to place standard-sized pamphlets at information centres in libraries, community centres and city sports facilities. Currently, however, no such display is allowed.

Council's decision, to add two survey questions the by-election, was designed to encourage voter turnout. That's a good, short-term fix. But we also need good, long-term ideas to ensure that voters are so engaged with the city that they don't have to be cajoled to cast ballots. It's something I'll work on when I'm on council.

UPDATE: Coincidentally, Canada Post is today delivering official "Notice of Election by Voting" cards in the mail today.
Posted by Terry O'Neill at 9:05 AM