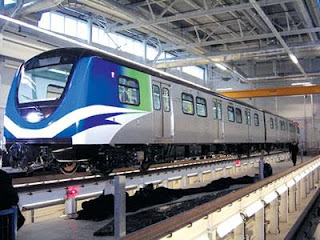 They call it the "Never-green" Line. That's the name a great many Coquitlam residents have given to the oft-promised but never-constructed Evergreen rapid-transit connection to Coquitlam Centre from Lougheed Mall.

Mayor Richard Stewart told council on Monday that he has received assurances from both the provincial government and Premier Gordon Campbell (aren't they the same thing?) that the line will, indeed, be built. But two big questions remain: when will construction actually start? and who will make up the funding shortfall?

Interestingly, even as we continue to wait for answers to these questions, Vancouver residents are starting discussions on what sort of east-west rapid transit line should be built along the Broadway corridor.

With the only sign of the Evergreen line still being that hastily-constructed project office in the Coquitlam Central parking lot, news of this development in Vancouver causes me to wonder whether, just as the Evergreen was shunted to a siding to make way for the Canada Line, we are now seeing the beginning of a process that will once again lead to the derailing of the Coquitlam line. I certainly hope not.
Posted by Terry O'Neill at 7:40 AM