Strike while the iron is hot. You've all heard this expression and appreciate its worth. In the context of Coquitlam, the hot iron can been seen as the coming of the Evergreen Line, a rapid-transit link that is in the process of transforming our city.
For the most part, City Council has been moving quickly to take advantage of the Evergreen--striking while the iron is hot. Council and staff are doing this by moving ahead with development in the areas around the Evergreen line stations. This has many beneficial effects, not the least of which is to supply of more market housing, which helps moderate price pressure. 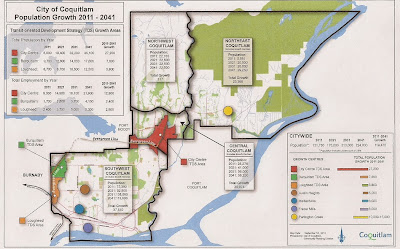 Things are moving especially fast in the Burquitlam area, which is seeing an explosion of medium-density construction, and in the core City Centre area, which is seeing major high-density (high-rises!) construction.
So, you'd think that a developer that was planning a medium-density mixed commercial-residential development in the shoulder area of a rapid-transit station, and also within the City's transit-development-friendly "Transit-oriented Development Strategy" (TDS) growth area (see the adjacent map), would be welcomed with open arms by Coquitlam.
But that was not the case on Monday night. The staff report on the proposal by Epix Developments strongly recommended that Council not approve the project because the "City Centre Area Plan Update" has not been completed, and because moving the proposal forward would strain the planning department's resources.
In the end, the majority of Council agreed and voted 4-3 to reject the plan. And that's a shame.
I voted on the losing side to move it forward because I believe the public has the right to have their say on this proposed development, which appears to be a fine fit for the area: it's close to Port Moody's Inlet Centre Station and will be even closer to a Falcon station, should one ever be built. It's on a piece of land that has been empty for decades. It's close to existing townhouses and commercial areas. And it's in the City Centre TDS Area (it is on the left side of the red City Centre TDS in the above map).
The developers have been told they now have to wait a few years--a delay that is sure to cost them hundreds of thousands of dollars in carrying costs.
In a way, Epix is a victim of Coquitlam's success in attracting Evergreen-related development. I have no doubt that the planning department is up to its eyeballs in work. But it's still a pity that we couldn't find the time and resources to allow this project to move ahead.
Here's a link to the Tri-City News' story on the issue.