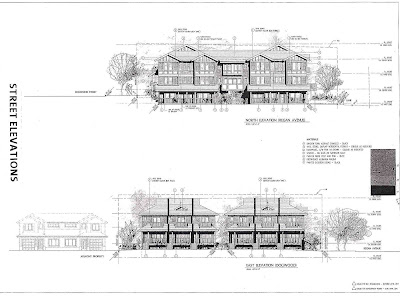 The more experienced I become in civic politics, the more I come to understand that the job calls for balancing the minuscule and the gigantic, the intimate and the public, and the practical and the visionary. Nowhere is this more apparent than when council must deliberate on a rezoning application, as we often do—particularly when it involves densification in an existing and well-established old neighbourhood.
Exactly such an issue was on our agenda on Monday night, March 26, as council took part in a public hearing on an application from Springbanks Development (Dogwood) Corp. of Surrey to rezone two lots at 730 and 734 Dogwood Street to allow for the construction of a 22-unit stacked townhouse building.
The lots are half a kilometre from the planned Burquitlam station on the Evergreen Line, a project that is already driving up land prices all along its projected route. The City has long anticipated that increased demand for housing near the line, especially affordable housing of the kind facilitated by multi-family developments, would lead to the redevelopment of existing neighbourhoods and the overall densification of the area.
Although the neighbourhood in question is primarily composed of single-family dwellings, its present designation in the Official Community Plan is “Medium Density Apartment” and its present zoning is RT-2 Townhouse Residential. Springbanks’ application asks for a rezoning to RM-2 Three-Storey Medium Density. Significantly, the OCP would allow for RM-3 zoning, which is even denser.
It is also significant that most of my colleagues on council and I campaigned in favour of taking action to further housing affordability, and that one of the most important and direct actions we can take in this regard is to allow for the construction of more multi-family dwellings, from duplexes and townhouses, to condominium complexes and high-rises.
And so we proceeded with the public hearing, at which several residents of the neighbourhood expressed their heartfelt concerns about the adverse effects of densification. None of them was especially specific about just what those impacts would be, but it was clear that all were worried about how the development would unsettle their neighbourhood and change its character for the worse.
The developer, on the other hand, explained that his project fit into what the City is planning for the area, and that the company had, in fact, gone to great lengths to limit the complex’s profile so that it appeared from one side, at least, to be just two-and-a-half storeys high, not three. I’ve reproduced an architect’s sketch, above.
Ultimately then, our votes would hinge on decisions we would make about the minuscule (one neighbour’s concern that the development would block the breeze) and the gigantic (the City’s vision for redevelopment of Burquitlam), the intimate (a young man’s worry that he would lose the neighbourhood in which he grew up) and the public (supporting the process which led to the development of the OCP), and the practical (local residents’ concern about increased traffic) and the visionary (our commitment to providing low-cost housing).
I realized while considering all of the above that we will be faced with scores, if not hundreds, of such applications over the next three years. We’ll consider each one on its merits, weighing the pros and cons, listening intently, asking questions when necessary, and then attempting to make the best decisions possible.
In the case of the application for the Dogwood Street rezoning, council convened following the public hearing and voted unanimously in favour of giving Second and Third Readings to City of Coquitlam Zoning Amendment bylaw No. 4293, 2012, thus bringing the development two steps closer to reality.
Posted by Terry O'Neill at 6:00 PM