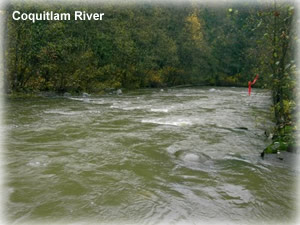 Take one part self-serving, subjective and emotional special-interest group, stir with an equal part of one-sided, unbalanced news coverage, and you end up with last week's front-page story in the Tri-City News about the allegedly endangered state of the Coquitlam River.

Last night's council meeting, at which the minutes of a recent Coquitlam River Aggregate Committee meeting were presented (along with last year's annual report), gave me, as chair of CRAC, the perfect opportunity to add some balance and shed some light on what is really going on in the river, and about the role of the aggregate industry (popularly known as gravel mines) in impacting the river. Here are some highlights of my presentation:

We were pleased to learn at our committee meeting that the Ministry of Energy and Mines has developed a new inspection matrix, centred not only on health and safety but also on environmental issues. This is a key, because the ministry is the permitting body which has ultimate control over the mines. The ministry rep at the meeting explained what the standards are and reported that the gravel operations are largely in compliance, except for heavy rain days.

The committee also heard from various members and sources that siltation occurs naturally in the river and that, naturally enough, such turbidity would be associated with heavy rain days.

Significantly, the committee unanimously agreed that tremendous progress has been made in the river's health. This is an environmental success story – an assessment with which the rep from the Coquitlam River Watershed Society was in complete accord.

And this brings me back to the Tri-City News story of March 14, which is based on a subjective report from a special-interest group, the Outdoor Recreation Council, which placed the Coquitlam River on its list of the province’s top 10 most endangered rivers in the province, citing the gravel mines and the impact of development.

But how seriously can we take the ORC's findings when it it blankets itself in mumbo-jumbo, mixing emotionalism and spiritualism. Specifically, the story quotes the Council’s concerns about the “Sacred Headwaters” of the Kokish River on Vancouver Island being of special concern. Sacred? Typical hyperbole and emotionalism -- environmentalism as a religion.

What’s next for the Coquitlam River, calling it the “holy heart” of the Tri-Cities? Or the hallowed heartbeat of Coquitlam Watershed? Or perhaps the “Sanctified Centre” of life in the Northeast Sector? All this sort of stuff, which is typical for green propaganda groups, is designed to stir emotions, not deal with the facts.

The Naturalists' representative also said that, “Ideally, what we’d like to see is the turbidity entering the river stopped.” My response: It would not only be impractical and impossible to eliminate all turbidty-causing agents from entering the river, but also completely unnatural. Natural events like erosion are always causing fluxuating levels of turbidty in any natural watercourse.

That said, our committee will continue to do its duty to ensure that the mines live up to their obligations to restrict turbidity-causing runoff so that the Coquitlam River can be a healthy watercourse. That's my fact-based, rock-solid pledge.