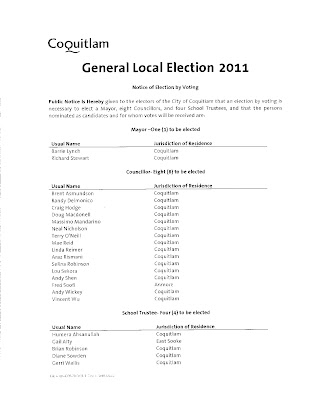 Today was the final day for candidates to withdraw from the election, and since I didn't change my mind (and never even considered it, actually!), it can be said that I am now an officially official candidate for Coquitlam Council in the November 19, 2011 general election. Above is the first page of the official notice the City is now distributing.

It's a bit hard to see, but what's of particular note in the document is that School Trustee candidate Gail Alty, a long-time veteran of the board, now lists her residence as being in East Sooke (Vancouver Island!). This certainly can't help her campaign.

Similarly, Council candidate Fred Soofi has declared that he lives in Anmore--a fact that I pointed out in a Facebook note several days ago. I later crossed paths with Fred at a Maillardville fundraiser, and he was quick to assert to me and several other candidates that he is now looking to buy a residence in Coquitlam.

I responded that it was certainly too bad for his candidacy that he had failed to make the purchase and move to Coquitlam before filing his nomination papers.
Posted by Terry O'Neill at 3:54 PM