The big push (and push-back) for subsidized daycare 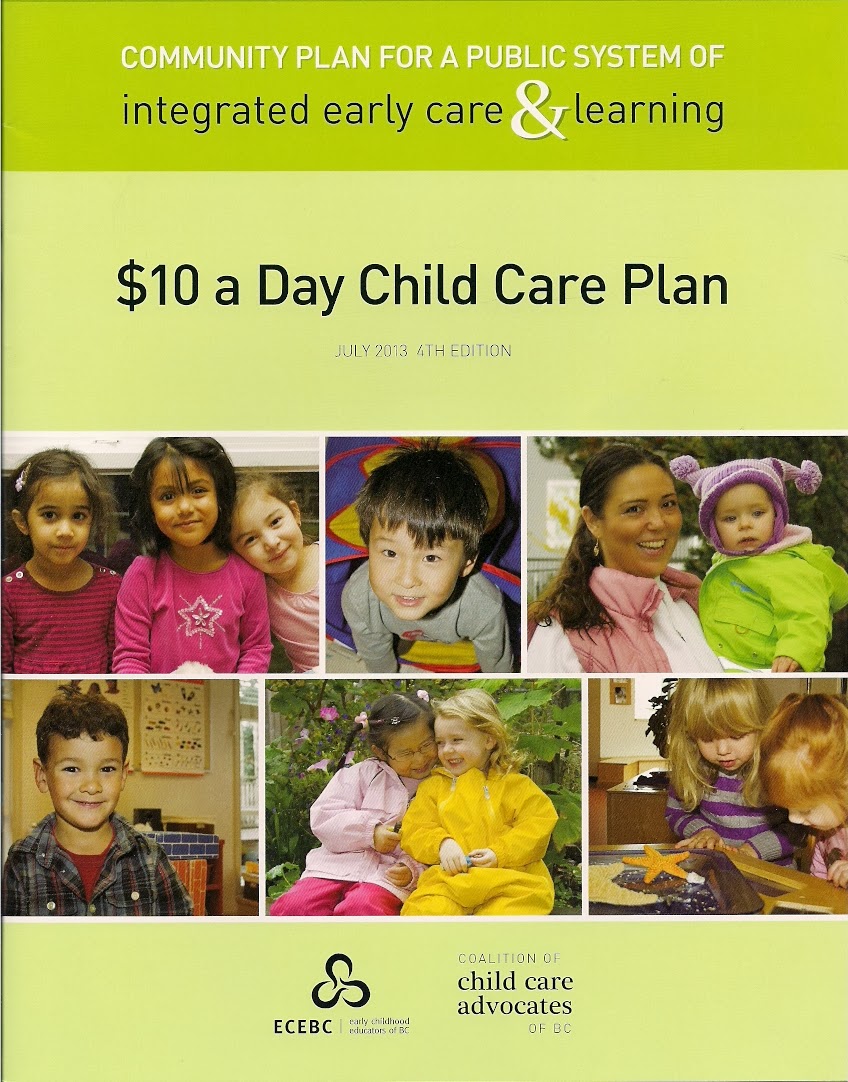 This past Monday, council-in-committee received a presentation from Sharon Gregson, a former COPE/Vision Vancouver school board trustee and now spokesperson for the Coalition of Child Care Advocates of BC, who called for Coquitlam to endorse a plan that would see the provincial government heavily subsidize all daycare in B.C. so that users would have to pay only $10 a day to put their preschool child in care. It would be free to those earning less than $40,000 a year.
The campaign already has scores of official supporters, but several aspects of the presentation didn't seem quite right, and so I questioned Ms. Gregson when she concluded. Chief among the issues that raised my eyebrows were these:
1. Her description of the childcare situation in B.C. as a "crisis." OK, I know that some folks have a difficult time getting good-quality childcare, but a "crisis"? Where's the evidence for such a loaded term? None was presented.
2. Her statement that the program would eventually cost $1.5 billion and that it would eventually establish a government-run daycare monopoly, staffed by highly paid unionized government workers. What could possibly go wrong?
3. Her use, in a PowerPoint presentation, of supporting quotes from two business leaders. Upon my questioning, it became apparent that these quotes were made only in general support of an educated workforce, and not in support of a major government program to pay for daycare.
I also asked about the seemingly high number of jobs that she said would be taken up by women who were free to enter the workforce. I think the figure was something like 17,000. On this subject, Ms. Gregson had a persuasive answer. Indeed, in subsequent research, I discovered that many studies have found that, freed of childcare duties, women are able to find jobs in great numbers.
However, in doing that research, I also found evidence that one of the supposedly great benefits of putting more children into daycare--that they will be better prepared for school--wasn't being found in Quebec, the longstanding home of government-subsidized $7-a-day daycare. This Maclean's story of a few years ago reports on an academic study that found a reverse effect, in fact.
You know where I'm going with this, right? Bottom line: I have reservations about the program, and think Council should steer clear of any ill-considered endorsement.

On a related subject, our City Clerk forwarded my colleagues and me an on-line comment left by one of Ms. Gregson's supporters. Below is the text of that comment and my response. I have omitted the name of the correspondent to protect her privacy.

Comment:
I attended the council-in-committee meeting on Monday, February 3, 2014 at which Sharon Gregson appeared before the council with a presentation on the $10-a-day child care initiative. Her informative presentation was followed by a fairly intense questioning by council members. I was taken aback and not a little disappointed that Ms. Gregson was not asked what, to me, should have been the first question - how would this initiative benefit the citizens of Coquitlam?
I hope that the mayor and council will give this initiative the attention it deserves and vote to lend their endorsement to this proposal.
My response:
Our City staff forwarded your online comments to members of Council, and I would like to take the opportunity to respond.
First, thanks very much for taking the time not only to write your note, but also—and more importantly—to attend council in committee in the first place. I assume that you were one of the women in the audience to whom Ms. Gregson referred during her presentation.
Let me start by acknowledging that I am one of the councillors who asked questions—and tough ones at that—during Ms. Gregson’s presentation. This does not mean, however, that I do not recognize the importance of the public-policy proposal Ms. Gregson was advancing. Rather, I think it reflects that very importance, in that I feel that before council makes any decision to join the many other municipalities that are now calling for the $10-a-day plan, we must ensure that all the arguments that support it are solid ones, that the facts and figures should be reliable, and that the quotes being used to support the initiatives must be authentic.
Furthermore, I am well aware of many government initiatives being launched with great fanfare, high expectations and a huge budget, only to end up producing unanticipated negative consequences. For example, a Maclean’s story of July 11, 2011,  “Is subsidized daycare bad for kids?” reports on the findings of three researchers who found that, contrary to the claims (and hopes!) that Quebec’s $7-a-day daycare would better prepare preschool children for school, “the effects of the program are found to be negative for five-year-olds and less convincingly negative for four-year-olds.”
The economic case for installation of a heavily subsidized daycare system seems to have some merit, especially in the area of allowing parents to enter the workforce. Nevertheless,  it is my duty as a City Councillor to be as certain as I can be when making decisions that will impact taxpayers throughout the province.
Ultimately, we all want what’s best for our children, whether it involves the sort of income redistribution that the $10-a-day plan calls for (that is, money being taken from taxpayers and given by government to government-subsidized daycares, which in turn allows more parents to enter the workforce and become taxpayers themselves), or whether it  simply means finding a way to keep more money in the hands of parents so that they can make the best decisions for themselves.