Personal but not political support from the Minister

It appears that my voter-encouragement idea, which would have seen the provincial government enact legislation to allow communities to more fully publicize the names of citizens who vote, has run into another obstacle. 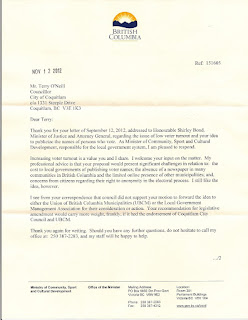 This is because I've just received a letter (the first page of which is reproduced here) from Bill Bennett, the Minister of Community, Sport and Cultural Development, suggesting to me that, while he sees some merit in my voter-encouragement idea, the best route to legislating the change would be for me to persuade Coquitlam council to support the idea and then seek support for the initiative from the Lower Mainland Local Government Association and the Union of B.C. Municipalities.

But, of course, I couldn't persuade my council colleagues this past September, and so my motion went no further. After that council vote, I wrote a letter to Attorney-General Shirley Bond , who had appointed a panel to look into online voting, asking her to look into my idea too. Ms. Bond referred my letter to Mr. Bennett and he has now declined to pursue the matter any further.

But while the matters is stalled now, I'd still like to respond to a few things Mr. Bennett said. He wrote: "My professional advice is that your proposal would present significant challenges in relation to: the cost to local governments of publishing voter names; the absence of a newspaper in many communities in British Columbia and the limited online presence of other municipalities; and, concerns regarding their right to anonymity in the electoral process. I still like the idea, however."

Regarding Mr. Bennett's concerns about the high costs and lack of outlets for publicity, I must point out that my idea would be to allow municipalities to more widely publicize the names of those who vote, not to force them. Communities with no budget to buy newspaper supplements or who have primitive websites would not have to publish the names if they didn't want to.

And on Mr. Bennett's expression of concern about voters' "right to anonymity in the electoral process," I must point out that no such right exists. The names of people who voted are already published after each election, and are available for public viewing for six weeks; however, the publicity is very limited, as it is restricted to a printed list and is available only to those who have the time and ability to visit City Hall in person. And, even then, the list cannot be reproduced mechanically.

To me, this represents something from the Dark Ages. Surely, if publicity is good in principle (as it clearly is, otherwise we wouldn't have the limited publicity that is in place now), then steps should be taken to apply it equitably, and not to limit the exposure--of the names of those who voted--to those who can spend several hours a day for weeks on end viewing and transcribing the names at City Hall.

Nevertheless, I thank Mr. Bennett for his response and for his personal support of my idea.
Posted by Terry O'Neill at 11:27 AM