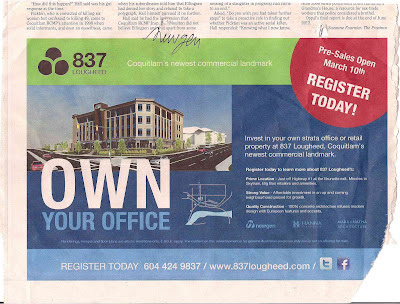 Last Friday, Newgen Real Estate Development Inc. of Burnaby took out a half-page advertisement (reproduced above) in the Coquitlam Now promoting its new, four-storey office and commercial building at 837 Lougheed Highway, at the corner of Blue Mountain Street.
It's a handsome building, located at an important intersection--a place that had been crying out for just this sort of building for years.
Newgen's ad called the building "Coquitlam's newest commercial landmark," and urged interested readers to "Register Today!" to "Invest in your own strata office or retail property." Pre-sales begin March 10.
So far so good. But there was only one problem, and a rather significant one at that.
At the time of the ad's appearance, Coquitlam Council had not approved the rezoning that would allow construction of the building. In fact, Council had given only first reading to the bylaw. Still to come was a public hearing, second and third readings, and then fourth and final reading.
That public hearing, followed by second and third readings, was scheduled for last night. And so, following an uneventful public hearing, I began consideration of second and third readings of the bylaw with a pointed speech, revealing the existence of the ad, and then informing my colleagues on Council and, moreover, all of Coquitlam, that I considered the ad to be premature and, moreover, to be an insult to Council and the people of Coquitlam.
I take my responsibilities seriously, and I work hard to abide by the processes that we must legally follow. Our society is, of course, built on the rule of law, which is something we must all respect.
I don't know Newgen's motives in placing the ad. Maybe the company assumed that, after giving the bylaw first reading, Council would automatically push the rezoning through. Maybe the company simply made a mistake in timing (the excuse offered by the Beedie group last year when an ad promoting its new Austin Heights tower appeared prematurely).
If the early placement was based on a presumption that first reading was tantamount to passage, I think it is important to send Newgen and other developers a message: first reading is only one step in an important process that has several subsequent steps, not the least of which is the public hearing. Assuming automatic passage based on a preliminary vote is wrongheaded and, in essence, an affront to the role of Council and the public.
I am thankful that each and every one of my Council colleagues agreed with me, and I also appreciate the fact that both the manager of planning and the Mayor said they would communicate with Newgen, informing it of our displeasure.
Thus satisfied, I was pleased to add my vote to the unanimous vote in favour of the rezoning bylaw needed to accommodate this fine building.
Posted by Terry O'Neill at 8:32 AM