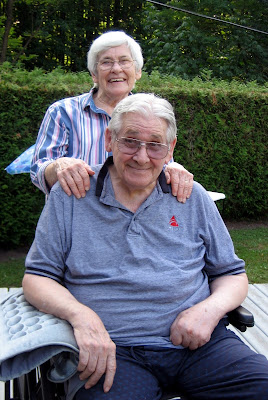 (Photo of Doug and Betty taken at their 65th anniversary celebration)

Doug died peacefully at Eagle Ridge Hospital in Port Moody, the result of a decline beginning a decade ago with a debilitating stroke. Ever-cheerful with his friends and justifiably proud of the loving and large family that he headed, Doug went to meet his Lord with his steadfast wife of 67 years, Betty, and other loved ones at his bedside.

Born in Winnipeg, Manitoba, Doug worked diligently throughout his fruitful life, and often told the story of how he steered towboats on the Fraser River and across a stormy Strait of Georgia while in his early teens. Tall and slim, he cut a dashing figure whether playing a fiddle or riding his motorcycle, and soon caught the eye of a certain petite young school teacher.

Marriage to Mary Elizabeth (Betty) James soon followed, and Doug threw himself into work to support his fast-growing family, often holding down two or three jobs—stocking grocery store shelves by day, for example, and slinging beer by night. Doug settled into a career in sales, travelling throughout B.C. to market goods ranging from beauty supplies to biscuits. Wherever he went, the charming and good-natured salesman greeted his customers with a warm smile and invariably left behind new friends.

Whether living on Kitchener in east Vancouver, Midlawn in Burnaby, the old house in Port Mann or the renovated family cabin at Lake Errock, Doug made sure that home was a welcoming place for friends, family and neighbours alike. After retirement, Doug and Betty spent many happy summers travelling through the U.S. in their RV. Back home, they handcrafted doll houses and doll-house furniture, becoming familiar and well-loved regulars at Christmas craft fairs throughout the Lower Mainland in the 1990s.

Doug was predeceased by his daughter Susan Pummell (1993). He is survived by Betty and their seven other children, daughters Katherine Bylin (widow of Dick), Mary O’Neill (and husband Terry) and Elizabeth Keobke (Brian), and sons Bill, Tim (and wife Ruth), Chris (Val) and Dave (Doreen). He also leaves behind 26 grandchildren and 19 great-grandchildren—a remarkable number that Doug, with a twinkle in his eye, would have said added up to “eleventy-seven.”

A Mass of Christian Burial will take place at St. Joseph’s Catholic Church, 140 Moody Street, Port Moody at 11 a.m., Wednesday, December 28. A reception will follow. The family extends its thanks to Fr. Joseph Nguyen for his pastoral support. As well, much gratitude is extended to the teams of nurses and aides from Fraser Health, to local emergency-services personnel, and to the medical staff at Eagle Ridge Hospital for their care over these past several years.
Posted by Terry O'Neill at 4:57 PM