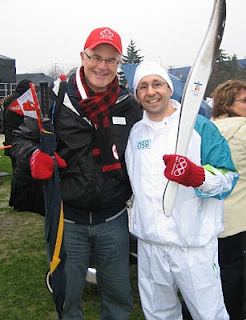 I have just returned from a memorable morning watching the Olympic torch run festivities here in Coquitlam. First up was attending the torch run procession as it passed the intersection of Lansdowne and Guildford, not far from our home. It was a great, enthusiastic and happy crowd, despite the early hour (7 a.m.) and the weather (cool and drizzly).
A personal highlight was when I recognized that an old acquaintance was the torch-bearer: the former Canadian national-team runner Brit Townsend (nee Peterson), who is now the head coach of the SFU track and field team. I had just enough time to shout out a quick hello, which was loud enough to catch Brit's attention.
Next, it was off to the big civic celebration at Mackin Park, where I was able to congratulate an obviously-proud Mayor Richard Steward for the successful event. Two big highlights: former Olympic wrestler Chris Wilson's lighting of the cauldron; and Charles Best secondary's Kristi Blakeway leading the Best Buddies out of the park at the end of the festivities. That's Wilson and me in the photo, above.
Posted by Terry O'Neill at 1:51 PM