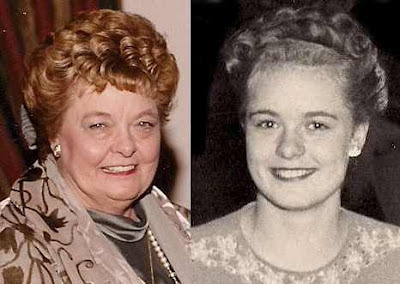 My mother passed away on Monday morning, and while we're all sad to see her go, we've also been remembering what a marvellous person she was. Here is the obituary that's appearing in today's papers:

A loving wife, mother, grandmother and great grandmother, Patricia passed away in her beloved West Vancouver home, surrounded by her caregivers and her husband of 63 years, John Joseph O’Neill. Always caring and passionate, Patricia continued to be a vital part of the large family of which she was immensely proud, even as she endured a series of medical problems that culminated in the heart condition to which she finally succumbed.

Born in St. Boniface, Manitoba, Patricia was predeceased by her parents, Senator John Caswell Davis, OBE, and Priscilla Emmerling Davis (nee Guilbault), and siblings Edward Davis and Lucille Huot. She is survived by her sister Yvonne Pratt. She is mourned by: her husband, Jack; her seven sons, Robert, Terence, Kevin, Lawrence, Stephen, Douglas and John; their seven wives, Beverly, Mary, Marie, Maureen, Susan, Wendy and Leah; her 19 grandchildren, Taryn (and Garret), Timothy (and Ashley) and Sean, Patrick and David, Shannon and Erin (and Tyler), Brian and Colleen (and David), Jaclyn, Shane, Colin and Blair, Danielle, Mitchell and Jocelyn, and Megan, Christopher and Michael; and one great grandchild, Arianna. Her many nieces and nephews throughout North America will also miss their cherished Auntie Pat.

Pat and Jack met and married at a young age and their dedication to each other was obvious to all who knew them. They were seldom apart but, when they were, they spoke frequently. Pat and Jack started their life together in Winnipeg, but also lived in Brandon and St. Boniface before moving to Vancouver in 1959. Pat devoted herself to her family while also engaging in countless acts of charity, for which she is warmly remembered by many friends and organizations.

Everyone who loved Pat was especially appreciative of the fact Jack enabled her stay in their home during her last years and was able to provide her with such a nurturing environment with the best caregivers possible. Pat often mentioned how Jack was taking such good care of her and how grateful she was. The family is indebted not only to those wonderful caregivers, but also to the numerous medical professionals who supported Pat in her final years, and to the priests who provided pastoral care.

A Mass of Christian Burial will take place at Christ the Redeemer Church, 599 Keith Road, West Vancouver, at 11 a.m., Friday, September 7, 2012. A reception in the church hall will follow.