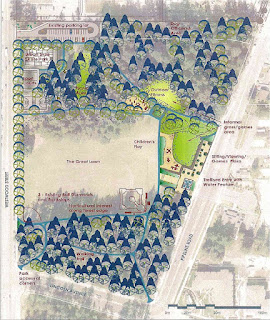 The following is an expanded version of a speech I delivered at Council on Monday night in relation to the controversy over the removal of about 200 trees, most of them unstable or rotten, from Glen Park. The opportunity arose to address the controversy because of the presentation by staff of an update on the park improvements (see graphic).

I’m so glad this update has come to council at this time, because it provides us with an opportunity not only to showcase the excellent plan that the city has for Glen Park, but also to respond to criticisms surrounding the removal of some trees in the northwest corner of the park.
As the Approved Concept Plan shows, the area in question will, in the near future, be home to an Urban Skills Skate Park, Sports Courts and a Picnic area – none of which would be possible if all the trees were retained.
What we will see are modern, well-planned recreational facilities appealing to all age groups – facilities that are of high priority as the surrounding area becomes increasingly diversified. Indeed, at a recent open house staged to showcase a high-rise proposed for just south of the park, a Coquitlam couple expressed to me their fears that increased densification of this area would lead to overcrowding around Lafarge Lake.
They were especially concerned about conflicts between bicycle riders and pedestrians. I was able to explain to them that development of Glen Park was proceeding in response to just such concerns – that it would alleviate overuse at existing parks. The couple was most gratified to hear this.
I would imagine that most Coquitlam residents would also support development of the park, given that it is another manifestation of a consistent approach that the city has taken to providing such facilities – an approach that, it must be noted, has led 99% of citizens to rate the quality of life in the city as either very good or good.
This is according to the most recent Ipsos Reid survey done for the city. Tellingly, 31% of those polled said that the quality of life had improved over the past five years. And, at 20%, the leading reason cited for that improvement was improved recreation facilities. Following not too far behind, at 15%, was more recreational facilities - that is, parks.
And so, a great many Coquitlam residents are not only very pleased with the quality of life in the city, but also cite the recreational opportunities being provided them as a top reason for the continued improvement of the quality of life.
But, as my colleagues and I have been hearing in recent weeks, not everyone is happy with the specifics of the tree removal at Glen Park. We’ve received numerous letters; we’ve been stopped in the street; we’ve been cornered at public gatherings – all by concerned citizens asking us about what’s going on at the park. Personally, I answer them by outlining some of the facts, as I’ve explained earlier. And that’s usually good enough.
But for the most extreme critics, there’s no good answer. These are the people who describe the selective tree removal as a clear-cut, or, more outrageously, as a “slaughter” or a “massacre.” I am not making this up. We’ve got the letters and emails to prove it.
I can only wonder how such people can sleep at night, knowing that, every day, throughout the world, not only are hundreds of thousands of trees being “slaughtered,” but so are billions of blades of grass!
Their nightmares must be horrific.
One correspondent urged us to watch a video by David Suzuki so we could, “reacquaint ourselves with Mother Nature.” Well, let me say that I’m already quite acquainted with Mother Nature. In fact, I’ve seen her in action on numerous occasions:
*I’ve seen the tsunamis that have killed tens of thousands of people in Japan,
*the droughts that have wiped out entire regions of Africa,
*the plagues of locusts that have destroyed hundreds of square miles of crops,
*the volcanic eruptions that have buried towns,
*the hurricanes that have devastated coastal communities,
*and the tornadoes that have sent babies hurtling through the air to their deaths.
Yes, I’ve seen all those, and I’ve concluded that I, personally at least, have no great need to reacquaint myself with Mother Nature. In fact, if anyone needs reacquainting, it’s those critics who need to be reacquainted with the amazing power of human ingenuity.
Humanity’s great progress over the past five hundred years rests in large part on our ability to, for example: 1) control the ravages of Nature – by inventing amazing medicines to beat back deadly diseases, by designing buildings to withstand earthquakes, by building dikes to hold off floods; and 2) to harness Nature for our benefit – by building hydroelectric dams, and by turning fossilized or liquefied organic material into fuels, for example.
I know that the critics mean well, and that they think they are the voice of reason, while evil city planners and councillors conspire with big bad developers to pave paradise and put up parking lots. But I believe these extreme critics have been green-washed by the likes of the aforementioned David Suzuki into believing, at best, that there’s a moral equivalency between human life and the nature world, and, at worst, that humanity is like a virus or a cancer to the natural world.
But this is palpably foolish. Does the deadly Dutch Elm disease, which is a natural occurrence, “slaughter” or “massacre” trees when it kills millions of them indiscriminately? If not, then why is our judicious removal of a few hundred trees, many of them rotting from the inside anyway, so horrible that it must be described as a slaughter or a massacre?
Are humans doing something evil by cutting down trees? Of course not. Unless, of course, you also believe that a beaver that cuts down a tree to block a stream and make his little, mid-pond hut, is evil incarnate as well.
And so, my message to the folks who have been horrified, mortified, scandalized, bewitched, bothered or bewildered by the removal of 200 trees (representing only 20% of the total) at Glen Park is this: Get a grip. Or better yet, go hug a tree at nearby Walton Park. There are plenty to go around.
Posted by Terry O'Neill at 10:18 PM