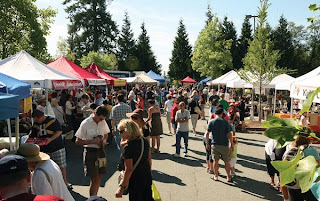 Yesterday, I received an email from Tabitha McLoughlin, Executive Director, Coquitlam Farmers Market, asking me a few questions about my position on issues close to her heart. Ms. McLoughlin wrote, “Coquitlam Farmers Market Society operates a summer farmers market in Coquitlam (May-October), a winter farmers market in Port Moody (November-April) and has established partnerships with some of the region's largest employers to bring our award-winning pocket markets to their employees.”

Here are her questions, followed by my answers, in italics:

As our supporters are interested in your views on local food, we would appreciate your insights on the following questions:

1. How does local food fit into your plans for a sustainable community? In what ways would you work to strengthen a more localized food system?

This is not part of my platform. Moreover, I do not adhere to the worldview that puts the idea of a ’sustainable community' on a pedestal. I believe in international trade, I support multinational corporations, I applaud international cooperation between governments, and I believe the future progress of the world will involve specific areas of the world capitalizing on and, indeed, exploiting, their inherent advantages, be they in human capital or natural resources, and then reaching out to and connecting with the rest of the world in order to share, sell or market their products and or ideas. Insofar as the "sustainability" movement has led to increased prices for food, higher taxes, and higher construction costs, it has had the effect of hurting those most at risk in our society--the poor and disadvantaged..

2. The Coquitlam Farmers Market Society contributes well over $1 million in economic benefit to the community, yet like other farmers markets around the region, we lack permanent space/infrastructure for year-round operations, have insufficient or no on-site storage, and often confront municipal signage bylaws that impede our ability to advertise within the communities we operate. Recognizing that farmers markets are a valued public amenity, offer low investment yet high return for the municipalities that host them, and contribute to many of the same civic priorities articulated by council (citizen health and wellness, active lifestyles, ecosystem preservation, waste reduction) how might you help the farmers market to flourish further within your community?

I believe that, in providing public space in the parking lot adjacent to the Dogwood Pavilion, the city government is doing its fair share.

3. Do you support the broad vision articulated for Colony Farm as a centre and space for local food excellence, where small scale, labour intensive and pesticide free (non-industrial) farming, farmer training, community gardening, local food marketing (e.g. market gardens or farmers market, direct sales to local restaurants and institutions) and education around the entire food system from seed to waste, may take place?

This vision is an interesting and, perhaps, even appealing one, but it also has the effect of opposing or undermining many of the attributes of Colony Farm that are valued by nature lovers, bird-watchers, environmentalists, and those, such as myself, who simply enjoy seeing a bit of quasi-wild nature in the midst of their suburban communities. There's definite aesthetic and, some would say, spiritual value in preserving Colony Farm as a haven for nature, rather than turning it over to those who would develop it for food production--a development that would be as much symbolic as practical, I think. As well, the high cost ($30 million, as I recall) associated with the establishment of the show farm adds to its drawbacks.
Posted by Terry O'Neill at 3:46 PM