Coquitlam should be rewarded for shouldering population growth

I don't have enough information to comment on whether or not Vision Vancouver is mishandling the way the City of Vancouver is proceeding with rezoning plans for several neighbourhoods--rezoning that would lead to higher densities.
However, I think it is obvious that the public pushback, which was once again in view last night (see this story) is not simply about concerns over inadequate consultation, but is also reflective of deep concerns about densification.
Coincidentally, I attended a meeting this morning, staged by Metro Vancouver and MC'd by Mayor Richard Stewart, that looked at the importance of well-planned densification and, specifically, its relationship to transit. Coquitlam is getting it right, for the most part.
Nevertheless, a major issue is that, while Coquitlam is shouldering its fair share of regional population growth by proceeding with such multi-family-centric projects as the Partington Creek neighbourhood on Burke Mountain, the ultimate success of such projects depends on getting frequent, reliable public transit into the area. And the fact is, this sort of service is lagging in areas such as Burke Mountain. 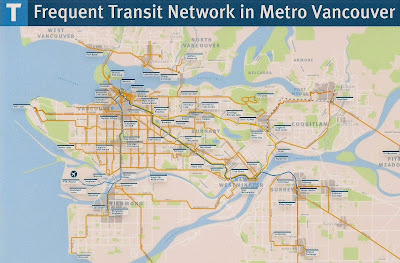 Compare that with Vancouver's situation. As the map to the right shows (and if you can't see it clearly, you can click here to see the web version), Vancouver is extremely well served by the region's Frequent Transit Network, aka FTN (the orange lines).
So here's my point: I think that if Vancouver ends up backing down on the densification rezoning and, thereby, fails to take its proper role in shouldering population growth, then Translink must seriously look at downgrading the FTN in the City of Vancouver and improving it in cities like Coquitlam that are living up to their commitments.
Vancouver shouldn't be able to have its cake and eat it too--to have a rich FTN while refusing to proceed with rezoning to allow increased densities in selected neighbourhoods. Period.