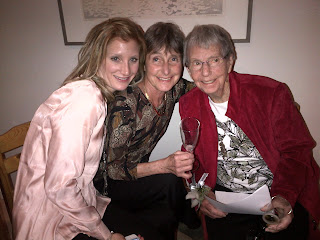 One of our dear friends, Sue Haberger, passed away a few days ago. Cancer took her away at the relatively young age of 65. I've decided to write about her passing here because Sue was well known in the community in a variety of capacities: as a standout a math teacher at Centennial for many years and then, after "retirement," at Coquitlam College; as a singer with several community groups and as a solo artist with a "genius" memory for lyrics; and, most recently, as a passionate advocate for preservation of the Riverview lands. It was in that context that she and her mom, Liz Rowley, were featured in this Tri-City News story last year. Sue was awarded a Queen's Diamond Jubilee medal last month, but her illness prevented her from accepting the award in person.
The picture I've reproduced here shows Sue (centre) with her daughter Kristina and mother at Liz's 90th birthday party last month. Sue is survived by those two and her son Erik. Sadly, Sue's husband, Achim (Kim), died last fall, also of cancer. May they rest in peace.
UPDATE: The Tri-City News has now published a lovely remembrance of Sue.
Posted by Terry O'Neill at 9:16 AM