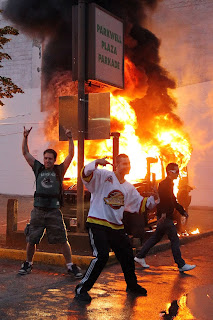 It's now been three months since the Stanley Cup riot of Wednesday, June 15. Three months--91 days, to be exact--and still not a single charge against any of the rioters.
This isn't a civic issue, and it's not a subject that's likely to arise during the campaign, but it's still something that, understandably, a great many people care about very deeply.
The riot was a disgrace. And our glacial justice system is also a disgrace.
At least, the Vancouver Police Department's new website, which was launched in order to give the public the opportunity to help police identify the miscreants, is proving to be a success.
Posted by Terry O'Neill at 8:33 AM